After the storm, a day of prayer
Area churches offer spiritual lifeline in atypical services The First Presbyterian Church of Dickinson was badly damaged in the floods from Tropical Storm Harvey. Sunday, members of the church attended an outdoor service to give thanks and praise. ( Steve Gonzales /Houston Chronicle )

A week after Luann Ash evacuated her apartment via a fisherman’s boat, she entered the lawn of the First Presbyterian Church in Dickinson with a frayed smile.

Hurricane Harvey had battered both the church and its town. The service was outdoors because the church’s building had been lost to the storm.

Ash’s arm was bruised from an IV. At the storm shelter where she’d spent four days, she suffered a panic attack and had been given intravenous fluids.

Organizations across the country continue to offer shelter and food to those in need after Hurricane Harvey. But on Sunday, declared a National Day of Prayer, people also were desperate for empathy, for small yet necessary gestures like a hug.

Churches, mosques, temples and other religions organizations across the city have opened their doors for evacuees, rallied relief efforts and comforted the faithful.

In Meyerland, 900 volunteers for the Westbury Church of Christ distributed a thousand bags of cleaning supplies to the neighborhood. The church expects two more trucks filled with supplies, donated from Churches of Christ outside Texas, to arrive soon.

In Houston’s Rice Village neighborhood, Christ the King Lutheran Church held its service in a flooded but still functioning building – with attendance 20 percent higher than usual.

In Dickinson, one of the areas hardest hit by Harvey, Ash’s First Presbyterian Church had suffered as much as its congregation. At the height of the flood, its neighborhood was 5 feet underwater.

A boat, abandoned on the other side of the highway, had crashed into the church, breaking the wooden pillars and scuffing the red brick wall.

When Rev. Kathy Sebring first ventured in, fish and snakes came swimming out. The ceiling, black with mold, demonstrated how fast humidity alone can ruin a building.

Except for the stained glass, everything is lost.

But Sebring, like many area pastors, chose to host services Sunday.

“That is not our church,” she said, pointing to the ruined building.

She pointed to the 25 people seated in folding chairs before her:

“This is our church.”

Sebring asked her congregation to pray for those whose lives were devastated, still in the first stages of recovery.

Congregants named the families that came to mind:

Then came Sebring’s sermon. Everyone needs something, she preached, and everyone can play a part to help.

A faint odor of garbage hung in the air. The M.I. Lewis Social Service Center, adjacent to the church, remained a hazard zone because raw meat and other food was inside when it flooded.

Before the members took communion, dipping bread into wine, they wiped their hands with disinfectant.

Then, when the service was done, the crowd didn’t disperse so much as move into action, serving people in need.

But Sebring, used to helping those in times of crisis, acknowledged the tough road ahead for the church. She said early donations could be a game-changer.

“If we could just get the floors and electricity up, we could start bringing people in,” she said. “They need us.”

David Barron contributed to this report

Harvey survivors: ‘The building is not the church. We are.’

For years, when Rev. Kathy Sebring stood at the lectern, preparing to give her Sunday morning sermon, she’d face rows and rows of pews. Some would be empty.
The pews are gone. So are the floors they were bolted down into. And the walls? They’re still just studs, as the church awaits FEMA funding to replace the drywall. 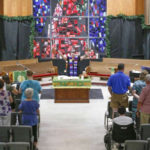 A year ago this weekend, Sebring had to call off Sunday morning service for the first time in her memory, texting parishioners, telling them to stay home and stay safe, as Hurricane Harvey’s wild and muddy waters rolled through the small town of Dickinson, inching up the exterior walls at the First Presbyterian Church of Dickinson, before flooding the church’s interior. Read more